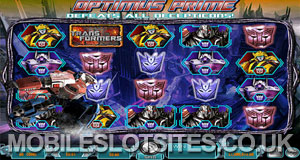 The first thing we’ll tell you about IGT’s incredible new online slot, is that you needn’t be a Transformers fan to appreciate it. You needn’t have watched any of the films in the blockbuster series, either. Yes, it’s based on the popular films, but this online slot manages to wow its audience – completely in its own right – with brilliant graphics, features and exciting gameplay. Transformers features 5 reels, 4 rows, 40 pay lines and the great Freefalling Symbols feature that players so often love. There are plenty more bonus and mystery features included too – read on for all the details.


The Transformers reels are packed full of characters out of the film: Optimus Prime, Shockwave, Megatron and more. The highest value symbol is the game logo, and there is a wild symbol represented by a purple cube. This substitutes every other symbol apart from the bonus symbol, which is the Cybertron planet.

Any winning combination of symbols will disappear after the winning value has been totalled, triggering the freefalling symbols feature. You may have seen this before in other online slots – it’s usually a big hit – as it results in new symbols cascading from above and the reels being re-evaluated for any further wins. This means you can literally keep winning and winning, just from one single spin. The freefall continues until there are no new winning combinations.

Transformers: Battle for Cybertron will surprise you with lots of mystery features that can occur randomly after any spin. For instance, Optimus Prime may appear and destroy all Decepticon symbols, or Megatron may emerge and destroy all Autobot symbols. This of course means that new cascading symbols will fall into place. Grimlock and Shockwave burn and blow up random symbols respectively, whereas Ratchet can add a bonus symbol to the reels, potentially triggering the bonus round if 3 are present.

When 3 bonus symbols have landed on the reels, the bonus game is triggered. Players are instructed to select a character to choose number of free spins and a range of multiplier values.

These are some great choices and gives you, the player, an element of control over how your bonus round pans out.

Transformers: Battle for Cybertron can only be described as ‘epic’! It’s mind-blowing, visually stunning with some great background music in keeping with the dramatic, powerful theme. The game features are spot on; not too complicated but just enough to keep us entertained. Highly recommended.