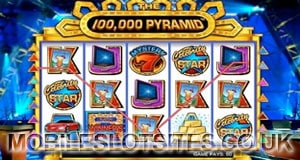 For those of you who liked The 50,000 Pyramid online slots game by IGT, here’s some good news: there’s a sequel out, it’s equally (if not more) exciting and it’s called The 100,000 Pyramid. We’re here to play it and tell you whether it’s a match for its predecessor. The 100,000 Pyramid is based on a popular TV Quiz Show, hence the brightly-lit studio setting and the fantastically cheesy atmosphere. There are 5 reels, 3 rows and 15 pay lines on offer, but the game is all about 2 things: the top paying symbol being worth over 100,000x your bet, plus The Winner’s Circle Bonus. Read on for more information.

The 100,000 Pyramid’s purposely tacky gold-framed reels display a collection of symbols showing a wonder of classic gameshow prizes and traditional slots symbols. Think Mystery 7s, gold ingots, Celebrity Star, Contestants, a car, a holiday, a watch, a TV and a camera. There’s also a very important symbol – the game logo – which pays 100,000x your bet should you land 5 of these on a pay line! Furthermore, the logo symbol is a wild and substitutes the remainder of the regular symbols.

The final symbol to mention is the scatter; it’s the key to the main bonus round and it’s called The Winner’s Circle Bonus.

Land 3 or more scattered The Winner’s Circle Bonuses to trigger The Winner’s Circle Bonus; which is the highlight of The 100,000 Pyramid Slots game. Beginning with two free spins and a multiplier of 1x, players receive 5 picks within the Winner’s Circle Pyramid. Starting from the bottom pyramid level, players will click and reveal prizes until their picks run out, or they get to the top of the pyramid. It’s possible to reveal multiplier boosts, extra free spins or even an arrow which advances you higher up the pyramid. Once picking is finished, the free spins begin with the multiplier value that you have earned. Providing you have done well with your pyramid picks, this can potentially be a really rewarding free spins game.

The 100,000 Pyramid is a more polished version of the original, keeping pretty much the same fundamental features, so if you loved the original you’ll like this one too. It’s a simple game until the bonus feature gets going which boosts the excitement value. We’d say it’s worth spending some time checking this one out.