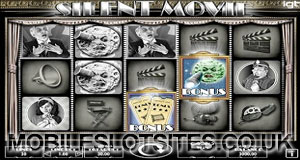 Prior to the 1920s, many films consisted of only pictures and were predominantly silent (that is, there was no spoken dialogue but the musical soundtrack was plentiful). As a result, actors and actresses were required to communicate almost completely through expressions and body language and movies were completely different to the motion pictures that we are familiar with today. IGT have combined the silent film genre with a modern slot game and bring you Silent Movie, a 5 reel, 3 row slot game with superb animated graphics. There are 30 pay lines and also plenty of bonuses to keep you entertained within this classic, yet modern game. In keeping with the theme, the game is mostly black and white but you will be treated to a burst of colour every now and then.

The 5 reels of Silent Movie consist of a bunch of old movie-themed symbols. The higher value symbols represent 4 famous silent movie titles: Dr. Jekyll and Mr. Hyde, A Muddy Romance, A Trip to the Moon and Keystone Kops. A camera, director’s chair, clapper, megaphone and showreel join these as the lower value symbols. In addition to these symbols, the game logo is the wild and features on reels 2, 3, 4 and 5 only. The wild will substitute all symbols except for the bonus.

If you see a burst of colour while spinning the Silent Movie reels, these are the bonus symbols, of which there are different types. A bonus game will be awarded by landing at least 3 bonus symbols. Depending on the combination of bonus symbols you have landed, your bonus game could be one of four varieties:

These bonus spins each come with an added bonus and as a result, you should be greatly rewarded if you trigger this feature.

Silent Movie may appear old-fashioned at first glance but we really love the way they have combined old 1920’s culture with modern-day gaming. The bonus choices are excellent and the soundtrack also sets the scene tremendously. A very well put-together slot game that we hope you’ll love playing as much as we do.