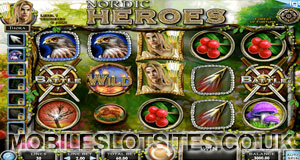 If you’re seeking something a little more exciting than your average, basic online slot game, IGT’s Nordic Heroes could be the one for you. The game impressively intertwines a 5 reel, 30 pay line slot with a fascinating and courageous forest adventure. Begin your journey playing as Thora, an elf skilled in archery, as she battles fearsome monsters in order to level up and permanently increase your payback. The game boasts detailed graphics and a multitude of features to keep you engaged.

The reel symbols change slightly depending on which level you are playing in Nordic Heroes. In the base game, starting as Thora, the symbols are adventure-related and include fungi, berries, coins, an eagle, a tree in front of a beautiful sunset and Thora herself. However, it’s the Battle bonus symbol that you really want; as this has the potential to push you up through the levels and provide you with more rewarding wins. Land 3 Battle bonus symbols on reels 1, 3 and 5 and the Battle Bonus is activated, whilst paying you double your total bet. There are battle reels at the top of the screen and these will spin after each free spin, until your character defeats a monster or is defeated themselves.  If 3 monsters are defeated, either 1, 2, 5 or 10 Victory Spins are triggered. Furthermore, Wilds can occur in the Battle Bonus as well as a Wild Reel feature whereby a whole reel can be wild during a spin!

Once monsters have been defeated in the Battle Bonus, you will automatically gain experience (XP) points, level up and unlock a new character as well as a new realm. There are 8 levels in total, from Wanderer to Champion, and the higher the level, the higher your payback will be – permanently!

There is also Mystery Multiplier reel feature whereby wins can be multiplied by up to 25x. This can trigger after any base game win as long as battle bonus has not also been activated.

Nordic Heroes is a fascinating game that has the potential to keep you engaged and itching to return to your computer to battle monsters and level up – if you like that sort of thing. Then game is certainly a little more complicated than your standard online slot game but once you’ve figured out the concept and got to know the characters it is truly enjoyable – you could almost forget about the possibility of winning big as you journey on your thrilling quest!