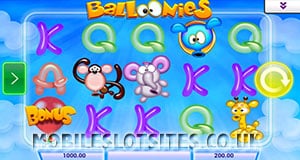 Balloonies was released towards the end of 2014, and is primarily a mobile casino slot machine game. Played over 5 reels, with a total of 20 paylines present to win on, this slot offers players the chance to engage in a balloon animal themed adventure, whilst simultaneously trying to land a non-progressive jackpot.

You’ll have coin sizes of 1p up to £30 to contend with in this slot, with minimum and maximum wagers stemming from 20p per spin, up to £600 per spin, respectively. All in all, this makes this rather children’s themed slot ideal for low, medium and high rolling players alike.

Several special features have been worked into the design of this slot. Firstly, there is a Floating Reels feature, which work the same as avalanche or tumbling reels, in that any wins you have will see the symbols explode, and be replaced by new ones. This gives you the chance to land multiple wins per spin.

Players can also pocket Star Multipliers every single time they land star icons. These can have random multipliers attached to them, so you can win up to 5x multipliers with those symbols. However, if you land enough symbols on the reels at once, those winnings may be multiplied by up to 30x their normal rate of pay.

Balloonies also contains a wild icon, allowing you to use them to substitute themselves for most (but not all) other symbols in the game.

Balloonies slot also contains a free spins bonus round, which is triggered by landing three balloons in any position on the reels. Players will the need to pick a balloon, in order to determine whether they have won 6, 8 or 12 free games. Naturally, you will be looking to land 12 free spins, and then hoping for those multipliers, if possible.

Balloonies is not the most complex slot ever developed, but it does tend to cough up the goods pretty often, especially in the free spins bonus round. Landing the free spins bonus, can be somewhat tricky, though. The Floating Reels feature doesn’t see you win as much as you might like to think.