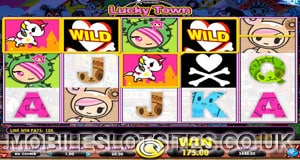 Get ready to experience the whirlwind that is Tokidoki; this is a crazy, cool and fun Japanese brand full of cute and colourful cartoon characters. Tokidoki Lucky Town is the online slot production that features Tokidoki’s quirky and lovable cartoon characters, it’s by IGT and it has plenty more to offer than simply being a fabulous treat for the eyes. Set upon a darkened, unusual and busy graphical design, the reels stand out with their vibrant colours and pretty cartoons. There are 40 pay lines on offer upon 5 reels and 3 rows, plus a completely unique feature that we think you’ll love; it’s called Reel Reveal and if you want to know more, then read on.

The eye-catching reels of Tokidoki Lucky Town feature plenty of cute characters from the Tokidoki brand. These are the higher value symbols, while the lower value symbols are the very colourful playing card symbols. The symbols offer some impressive graphics as winning combinations occur, therefore keep your eyes peeled as you spin.

The monochrome heart and crossbones symbol is the highest paying symbol and also the wild. It will substitute the other symbols (apart from the special Reel Reveal symbols), and furthermore, it is possible to land a 2x wild which awards a 2x multiplier to any winning combinations that it creates.

This is the unique feature of Tokidoki Lucky Town slot and the highlight of the game, undoubtedly. There is a yellow spinning vinyl record symbol that appears on the fifth reel only. When it lands, it triggers Reel Reveal; this means that the reels shift to award an additional free spin – a Reel Reveal Spin – that offers an additional special feature. The reels can also be shifted and revealed between 1 and 5 times.

The special feature symbols are:

If you’re seeking something a little unique then we’ve found your game. That’s right – Tokidoki Lucky Town is every bit as crazy and brilliant as we expected it to be. It will appeal to a certain audience – perhaps that isn’t you – but why the heck not give it a whirl and see what you think.