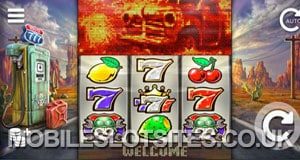 Are you ready to head out on the highway? Route 777 is a nostalgic online slot game by Elk Studios.

Based upon the famous Route 66 in the USA, Route 777 takes us along a fictional American highway; through the desert, passing cacti and gas stations and all while bopping along to a country and rock n’ roll soundtrack.

The reels of Route 777 display an abundance of classic symbols: sevens, bars and fruit, for example. The sevens are the symbols to aim for, in particular the silver ones which are the highest paying. Bar is the medium value symbol, with the fruit such as lemons and cherries making up the lower value icons.

Landing skull and cross bones on the reels is a good thing; you’ll want 3 of them anywhere on the reels to kick off the free spins bonus game.

The free spins bonus feature is triggered when 3 skull symbols land on the reels. You can win between 5 and 15 free spins; the number is generated at random. Land another 3 skull symbols during the free spins and trigger the Fortune Wheel. The wheel will spin until three identical seven symbols are collected, or the Stop sign lands.

Route 777 also offers the Overtake Respin Feature. If you land identical symbols on first 2 reels, 5 respins are generated. The first 2 reels remain in place apart from moving downwards by one position each respin. The third reel respins as normal.

777 is a route you should definitely take. We loved the nostalgia, the bonus features and the potentially very lucrative Overtake Respin Feature. If you’re a fan of classic and nostalgic online slots, hit the road with Route 777.