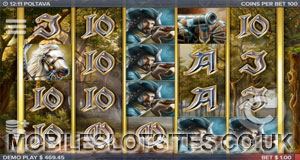 The theme of Poltava: Flames of War, an online slots game from Elk Studios, is the 1709 Battle of Poltava. This battle holds significant importance in Ukrainian history as it is regarded as the Russia’s victory over the Swedes, and the start of the Swedish decline in power. Elk Studios’ slot game is a powerful, intense and atmospheric tribute. Beginning with an animated introduction that could give a blockbuster movie a run for its money, the game boasts super sharp and smooth graphics and an adrenaline-inducing soundtrack. There are 5 reels, 4 rows and 40 pay lines on offer, in addition to a few captivating bonus features to keep you entertained. You can also win up to 180,000 coins.

You will catch a glimpse of the battlefield aftermath behind the transparent 5 reels of Poltava. Some of the symbols are theme-related, these include a horse, a gun and a soldier. These symbols are joined by lower value, playing card icons, and there is also a Poltava logo symbol. This is the wild, and will substitute all other symbols but the bonus.

The lion symbol is the bonus and offers a pretty impressive animation as it lands. Landing 3 of them in view will not only turn them into sticky wilds, but will activate the Flames of War bonus game. This is the main feature and awards 3 free spins. During the free games round, any bonus lion that lands will instantly turn into a sticky wild and generate another free spin.

Another feature of Poltava is the Marching Reels. Land a full reel of cavalry (horse), artillery (gun) or infantry (soldier), they will stick as you receive a re-spin. Any further matching symbols that land to the right of that reel will move – or march – to the left, and the stacked symbols will move across to the right. This occurs until no new matching symbols land.

Elk Studios rarely fail to impress with their superior range of online slots games and Poltava is no exception. This is a high quality game with an interesting range of features that is sure to keep you entertained.