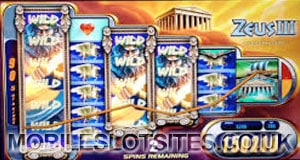 WMS Gaming are behind the Zeus series of slot game, and Zeus III is their latest title in the franchise. The game has become something of a flagship brand for WMS Gaming. This massive 6-reel video slot contains no less than 192 paylines. With its Greek mythology theme, and its surplus of free spin bonuses and multipliers, this is a game to rule all. Zeus III can cost you anything from 40p per spin, up to £120 per spin, but with a spot of luck, you could walk away with a non-progressive jackpot worth £15,000 in total.

WMS Gaming loves to incorporate new features into slots, and their Zeus III game was the first to contain their Reel Boost engine. We’ll discuss this engine more when we look at the free spins bonus in just a moment, but first let’s talk about the wilds.

Zeus III contains nudging wilds. Whenever a Zeus symbol appears on the reels, it could potentially fill an entire reel with wild symbols. If a full set of wilds appear, players will see it turn into a wild reel. These nudging wilds can then be used to push yourself into a better position when it comes to landing wins on the slot.

Zeus III certainly has a lot to offer players, but there are some downsides to the slot. For a kick-off, this slot is a high variance game. When it pays, it does so rather generously, but don’t expect wins to be frequent. This makes it a tough sell. Zeus III is epic, though, and finely continues on the success of its two predecessors. If you played those two games, you’d be hard-pressed not to give this one a look.