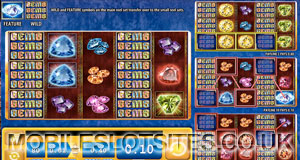 Gems Gems Gems is one of WMS Gaming’s most original, and unique video slots. The game is actually played over 5 reels and 80 paylines. It largely features gemstones as its imagery, but don’t let that fool you, there is plenty of excitement to be had in this game, even if its theme seems a little straightforward and simplistic. Gems Gems Gems contains 4 sets of reels, and wagers are going to fly from 40p per pin, up to £80 per spin, depending on how many sets of reels you wish to play with. You can win up to 200x your total bet with this game, though, which is fair given the number of ways to win you actually have.

Play This Slot At

Obviously, the four sets of reels are going to stand out. When you start playing, all symbols will appear on the main set of reels. If you land any special symbols, they will be sent over to the additional reels.

Wilds appears as the Gems Gems Gems logo, and can replace all other icons, save for the diamond feature icon. Wilds are also the top paying symbols (an honour jointly held with the golden nugget symbol).