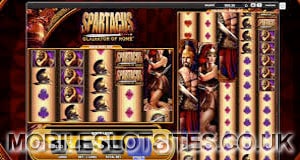 WMS Gaming sure does love their historical themed video slots, and Spartacus: Gladiator of Rome is another fine example of that. This WMS Gaming slot is played out over their colossal reels structure, meaning that symbols can be transferred from the base reels (of which there are five), onto the colossal reels for added wins. Spartacus is a popular slot, and features over 100 paylines over the course of the two sets of reels. Wagers tend to vary from a low of 1p per line, per spin, up to £250 per spin. Like many other historical themed WMS Gaming slots, Spartacus tends to be more towards the medium to high variance marker than low variance. At most, you can expect to win up to 250x your total bet with this Roman gladiator themed slot.

Players will want to keep their eyes peeled for the Spartacus logo. Not only will this symbol substitute for other symbols barring bonus icons, it will also transfer itself onto the colossal reels. Wilds can only appear on the first, third, and fifth reels of either the base reel set, or the colossal reel set. That should prove to be enough to trigger big enough wins to satisfy players, though.

The bonus icons in this game are represented by the Coliseum. Players need to land at least 3 of them on the reels in order to activate a free games feature. In fact, 3 symbols will offer you 8 free spins with all of your winnings doubled. Four such symbols will see you bag 12 free spins with a 5x multiplier, whilst winnings will be issued with a 20x multiplier on 20 free spins, if you land all 5 bonus icons on the reels.

Spartacus: Gladiator of Rome is very prosperous if you’re on a good run. Being one of their higher variance slots, wins don’t come along very often. However, when wins do come in, with the colossal reels feature, transferrable stacked wilds, and 100 paylines to boot, those wins do tend to be rather gigantic in size.