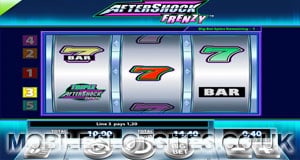 Aftershock (also known as Aftershock Frenzy) is the title of a WMS Gaming-powered online slots game that’s fast, electric and offers unique features. First impressions are of a classic slots game, with 3 reels and traditional symbols. There are only 5 pay lines across plain silver reels, set upon a simple navy background. The soundtrack consists of what we’d describe as 80’s electro music. Playing the game uncovers surprisingly modern features, however. Read ahead for more information on the Big Bet option and the Aftershock Frenzy Bonus Feature.

The bonus feature of Aftershock is a randomly activated feature; in other words, it can trigger unexpectedly during any spin that is wagered. Aftershock Frenzy feature consists of up to 7 free spins with guaranteed prizes. During the feature, any Double or Triple Aftershock Frenzy symbols landing on the centre pay line or within one position of it will trigger Shocking Wilds. This means that the triggering Frenzy symbol(s) stick and nudge to on or within one position of the centre pay line for the rest of the bonus feature.

Aftershock provides a surprisingly modern and playable game despite its classic appearance. The unique Aftershock Frenzy feature offers a unique aspect to the game that is worth checking out. Be sure to use the Big Bet feature for increase in RTP, too.