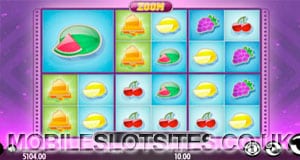 Thunderkick are renowned for their innovative creations in the online slots world, so it’s always a pleasure to play and review a new game of theirs. Zoom is the latest Thunderkick slot that offers fairly unique gameplay. As the game loads, displaying its purple background and predominantly pastel-coloured reels, you’ll notice there are 6 reels instead of the typical 5 that we are so familiar with. There are 4 rows and you may also notice that the reels are divided into 6 larger, 2×2 areas. The symbols are mostly of a traditional nature and there are a generous 64 fixed pay lines on offer. Spin the reels listening to a pleasant soundtrack and admire the smooth graphics that Zoom has to offer.

The 6 Zoom reels may feature classic slot machine symbols but the 6 reels and pastel colour scheme indicate that this is far from a traditional, basic slot game. The symbols include a gold star, a silver 7 and a gold bell. The lower value symbols are a bunch of grapes, a melon, a lemon and a couple of cherries. In addition to the base game symbols, there’s a vibrant Wild symbol; this substitutes everything but the golden Z symbol.

The golden Z symbol, or Zoom, is the key to the main feature in this Thunderkick game. The Zoom symbol is basically a scatter which, upon landing, triggers a re-spin and expands to fill a whole 2×2 larger reel area. So, if a Zoom symbol lands, initially it expands to fill a 2×2 square and when the re-spin occurs, a random Massive symbol lands and fills that position. Thus, an improved chance of winning combinations occurs.

Zoom is undoubtedly a pleasant game to play. We’d like to see a bonus game or two to add a little oomph, but if you like to sit back, relax and watch those reels spin then this is definitely the game for you. Simply whack it on autoplay. It’s easy on the eye, it features a cheerful soundtrack and the main feature triggers often. There’s also a theoretical RTP of 96.2%, so it’s gotta be worth a shot.