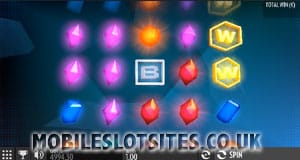 Flux is a unique triple-feature slot, and one which has been brought to the mobile casino world by Thunderkick. The game isn’t actually that dissimilar to Net Ent’s Starburst, and other shape and gemstone themed titles of late.

Flux contains three special features as we’ve said, but we’ll come to those in just a moment. This 5-reel, 15-line video slot allows players to choose a basic 10p up to £100 bet. Wins can be worth as much as 2,400 coins in this slot, and you will need to bag 5 stars, or 5 wilds on any active line in order to win that non-progressive amount.

Let’s begin looking at the special features with the wild icon. This symbols comes in the shape of a “w”, and can replace all other symbols in the video slot, save for the bonus icons.

A bonus symbol in the shape of a “b” is also included in Flux. The game will offer players a free spins bonus round if the player lands 3 of these bonus symbols anywhere on the screen. You will get to choose which bonus game you wish to play from a total of three.

As mentioned earlier, there are three very special bonus features in this game. One of these is the ability to win both ways. The second of these is to land 3 extra rows of symbols to win on. The third involves the win both ways, and the 3 extra rows of symbols. The amount you can win with the symbols varies, depending on which bonus feature you have selected, with the latter naturally worth the least, due to you having access to both of the first two features in one.

Flux has some decent enough special features for you to choose from. However, from a gameplay perspective, it is pretty plain. It is also rather bland when it comes to its pay-outs, and wagers. Lovers of simple slots such as Starburst will find Flux entertaining, but there doesn’t appear to be enough happening to lure most players in.