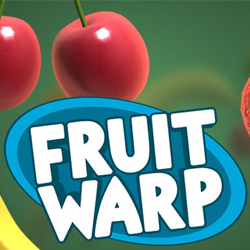 The Fruit Warp video slot is a Thunderkick developed game, and one which showcases the beautiful graphics that this small-scale company is capable of offering in their games. Fruit Warp is not your run of the mill game, in that there aren’t any reels as such to bet on, and when the spin button is clicked, fruit tends to “warp” onto the screen. You still need to match fruit to win, though. Wagers can range from a low of 0.10 per spin in this game, up to 100.00 per spin. The top prize is worth well over 200x your total bet, if you strike it lucky playing this truly original fruit machine game.

Landing Fruit Mode is the most treasured aspect of this game, as Fruit Mode sort of acts like a bonus round in this very simplistic, if incredibly creative video slot machine game.

Once the Fruit Mode has begun, for every symbol the player matches they will active 1 step on the Warp Meter. A new re-spin is offered when players land winning combinations in Fruit Mode. As long as they keep winning, re-spins will keep appearing. Each step on the meter contains added perks, such as dynamic increasing multipliers, or extra lives. Extra lives allow you another re-spin if there are no further winning combinations on the screen.

Fruit Warp is certainly one of the most original and creative takes on fruit machine gaming ever to appear in the online gaming world. Thunderkick have done a solid job in bringing it to your favourite casinos, even if the game feels as though it is less of a slot, and more of an instant win title. If you’re tired of your one-armed bandit, or pub fruit machines, then you should certainly give Fruit Warp a run for its money.