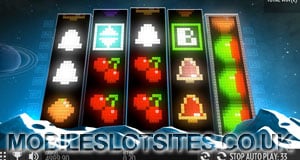 Arcader is an online slot game powered by Thunderkick with 5 reels and 15 fixed pay lines. The first thought that springs to mind when Arcader is loading on your computer screen is ‘retro’ or ‘classic’ – this game is clearly based on games played back in the 80s or early 90s with basic neon block symbols. Upon further inspection, it comes to light that Thunderkick have managed to create a game that could actually be described as ‘old school meets futuristic’.  While it is evident that this game has a truly classic feel to it, there is also something very modern about it; the setting is in space, the reels are 3D and those classic neon symbols are shiny and polished. Suddenly, the game doesn’t feel quite so 80s! The theme works, and is a great base for an interesting online slot with a variety of bonuses, expanders and sticky wilds. Spin the modern yet classic Arcader reels and bet from 20p to £100 per spin.combinationsy graphics.

The Arcader fluorescent reel symbols are based on standard, old school fruit machines, including the number 7, the bell and colourful fruits such as cherries, lemons and melons. The wild symbol (W) will substitute all other symbols except for the bonus, the mystery symbol and the expander symbol, and can be stacked on reels. The Expander symbol (two white arrows pointing away from each other) will expand the reel that it lands on with the symbol that will provide the best possible winning combination.

The bonus symbol (B) will trigger the bonus game if 3 or more land, plus up to 9 free spins and up to x9 multipliers – not too shabby! The bonus game spins feature sticky wilds – if they land on reels 2, 3 and 4 they will remain sticky throughout the bonus game as well as substituting all other symbols in the bonus game. This is where you can really boost those wins for a substantial amount of cash.

The theme that Thunderkick have used for Arcader really works. People love a bit of nostalgia, and combining the classic arcade-style game with a touch of futurism is the perfect combination to provide a hit game with plenty of thrilling bonuses and opportunities to grab some big prizes. You won’t be disappointed!