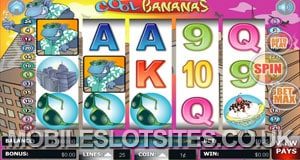 When it comes to online and mobile slots, if simplicity is your thing, Cool Bananas might be the next one to try. A NextGen game, Cool Bananas features a monkey theme and an unfussiness in terms of graphics and gameplay.

There’s a 5×3 reel grid with vibrant graphics; these lack a sharpness we tend to observe these days in many modern slots. However, if you can overlook this then the game is cheerful, bright and summery.

Set in front of a city skyline and featuring up to 25 playable paylines, Cool Bananas can be played on any device. It’s easy to play and features one bonus game, which is what the slot is centred around.

The bright reels of Cool Bananas feature – you guessed it – a fair few monkeys, bananas and sunshine. Think banana split dessert, sunglasses, a summery city and a female dressed for the rays. There are also playing card symbols from A – 9 making up the lower value symbols.

The two main symbols to look out for are the Might Monkey and the Banana scatter. Mighty Monkey – unmistakable in the Hawaiian shirt – is the wild and will substitute all symbols except for banana scatter. If Mighty Monkey features within a winning combination, that prize will be doubled, which is very nice. There are also a few cute animations upon the monkey making up a win.

Landing 3 or more Banana scatters on the reels is the main aim of the games, as you’ll receive a bundle of free spins.

Once you’ve landed your banana scatters (at least 3), you’ll receive 8 free spins for each banana on the triggering spin. Furthermore, all prizes will be doubled during free spins, and they can even be retriggered. It’s possible to win up to 80 free spins with double prizes; a pretty lucrative prospect, we’re sure you can imagine!

If you’re expecting to be wowed with sharpness and meticulously-planned gameplay, Cool Bananas isn’t the game for you. It’s for the laid-back type, whom appreciates simplicity and ease in a slot game, and is unfazed by a lack of graphics sharpened to perfection. We found Cool Bananas to be well worth playing just for the lucrative free spins bonus game, but if you love a monkey theme and would prefer state of the art graphics and gameplay, we’d say NetEnt’s Planet of the Apes is probably more up your street.