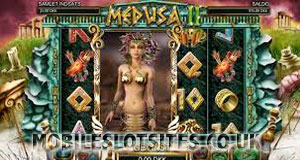 When NextGen Gaming announced that they would be producing a sequel to their much loved Medusa slot, the gambling community went into meltdown. This sequel (known plainly as Medusa II) features a total of 243 ways to win over its 5 reels, and is superior in every way to its predecessor.

The game features line bets of 0.01 up to 2.00, but you won’t be able to adjust the number of lines, since there are so many of them. At its cheapest, the slot will cost you around about 0.25 a spin, whilst it won’t cost you any more than 50.00 a spin at its most costly. Like many NextGen slots, you can win as much as 500 coins in this game.

Medusa herself acts as a wild symbol in the slot. She is capable of appearing stacked on the reels, and can substitute herself for all other icons, save for scatters. Also, during the base game, Medusa may randomly be attacked by a soldier. When this happens, she can turn the soldier to stone with her gaze, leaving behind a wild.

During any spin, between 2, 3, 4 or 5 adjacent reels may lock themselves together, to display the same symbols. This feature is known as the Medusa Locked Reels feature, and can result in big wins being paid out.

The Medusa II logo is a scatter icon in this game. It can offer you scattered wins worth 50, 125 or 250 coins for 3, 4 or 5 respective scatters appearing in any position on the reels. The scatter also does more than that, though.

If you land 3 or more scatters, you will trigger a free spins bonus. During this bonus, every single spin will feature the Medusa Locked Reels feature. If wilds appear on those locked reels, you’re in for a seriously big payday.

Medusa II contains far better features than its predecessor, as well as better graphics. It is quite similar in terms of base game action, though, so if you love the first Medusa game, you’ll love this one, too.