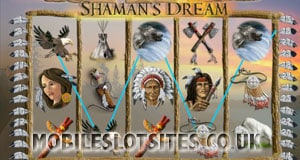 This slot is one of Eyecon’s Native American themed mobile slot games. It contains pretty predictable imagery, such as tomahawks, totem poles, wolves, tepees, and stone flint axes, although there is something rather wonderful about the way these symbols have been created. They are authentic, you might say.

Shaman’s Dream is played over 5 reels and 25 paylines and players have the chance to win a moderately sized non-progressive jackpot in this slot. Wagers are dirt cheap, too, with minimum and maximum wagers costing anything from 1p up to £10 per spin, respectively.

Now for the special features. There aren’t that many, but what exits is reasonable enough for a slot of this calibre. There are wilds, and they take the shape of wolves. Wolf wilds can replace all other symbols, barring scatter icons.

A rather elementary gamble feature has also been included in this slot, although don’t expect it to do anything magical. It is a simple double up or lose feature and one which is best avoided, unless you are playing with small stakes, since your chance of success isn’t great.

There is a free spins bonus round, but as we’ve said, special features aren’t exactly flowing in the Shaman’s Dream slot.

Players can win a total of 15 free spins in Shaman’s Dream, simply by landing three or more of the dream catcher symbols anywhere on the screen. In this bonus game, players will have the value of any wins they acquire tripled. That’s certainly not too shabby for slot which costs ten quid per spin at the most.

Shaman’s Dream slot is one of the simpler Native American themed slots out there on the net. It doesn’t offer you much in the way of original features, and its simplicity is reminiscent of beginner slots, making it ideal for newbies. Even so, it is quite decent graphically, and to some players that makes all the difference in the world. The best (and fairest) way of describing Shaman’s Dream would be to say that it is an average slot game.