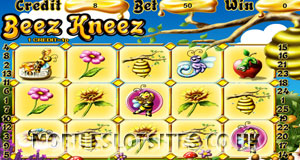 The Beez Kneez slot is themed exactly as it sounds. This slot is primarily about bees, and their honey making ways. The slot is one of Eyecon’s most colourful, and is also rather childish in the way that it has been developed. What you get with the Beez Kneez video slot is 5 reels and 25 paylines of fun-filled slot action, at a more than reasonable price.

At its cheapest, this non-progressive jackpot will set you back around about 1p per line, per spin. At its most costly, players will notice that the Beez Kneez slot costs them around about £12.50 per spin. The slot is loaded with special features, and even has a top jackpot worth 5,000 coins for you to win.

The first of this slot’s many special features is a pick and win bonus game. You can active this bonus game by landing a winning combination of worker bees on any active line. Players will then get to pick from a number of options on the screen, after which they will pocket prizes based on those choices.

A cocoon is a wild symbol in this game. It can be used to substitute itself for any other icons in the game. It also serves another purpose. The cocoon icon can act as a scatter icon, offering you scattered wins as you play, as well as other perks.

There is also a gamble feature in the Beez Kneez slot, although most players won’t be remotely bothered with using it.

Beez Kneez’s main special feature is a free spins bonus game. This free spins bonus can be triggered by landing the cocoon scatter icons anywhere on the reels. Players can win up to 25 free spins in all, with them also able to land a 3x multiplier against those winnings.

Of course, there are things to like about Beez Kneez. However, there is also the degree of childishness which may not be everybody’s cup of tea. Some players will find Beez Kneez appealing, and others won’t. That is just the way of it.