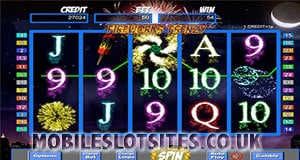 Fireworks Frenzy is one of a number of top firework themed slots on the net. Although it is not as famous as some of its counterparts, this slot is widely available in many top mobile casino sites. It has been developed by Eyecon, who are one of the smaller developers of slots.

There are no prizes for guessing the theme of this slot, which is played over 5 reels and 25 paylines. Players can win as much as 3,000 coins with the game’s non-progressive jackpot, whilst not wagering any more than £12.50 per spin at the most, although they can wager as little as a penny per spin on Fireworks Frenzy if they wish.

The gambling feature is the least appealing of all the special features in Fireworks Frenzy. The wild icon and the free spins bonus round are far more adventurous, and profitable. Players can use the Catherine Wheel wild symbol to replace all other icons in the game. When it does so, it can actually triple your winnings, which is appreciated. Due to the power of the wild, though, other features are somewhat diminished.

This game includes a bonus round. If players three or more of the firework icons (which act as scatters) anywhere on the reels, they will win a free spins bonus game. Players can also pocket wins worth as much as 300x their total bet as a scattered prize, and begin the bonus game with up to 25 free spins in all. What follows is a relatively straight forward free spins bonus round.

There is nothing inherently special about Fireworks Frenzy, although that doesn’t stop it from being a moderately decent slot to play. Graphically is it enjoyable. Everything about this game is fairly standard, from its 25 lines, to its gamble feature (which you will want to avoid), and its pay-outs. There can’t be any real complaints about what Fireworks Frenzy brings to the table, even if it does lack the spark to set the casino world ablaze, so to speak.