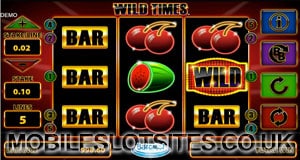 Demand seems to be high recently for super sleek and modern online slots games that feature a traditional nature. Wild Times from Barcrest is no exception; it’s a 3 reel game with just 5 pay lines (in the standard version of the game – more on that later) and classic slot machine symbols. Featuring a basic yet sharp design, the backdrop looks like a dancefloor under dim lights, while the reels are plain black with bright, polished symbols. The sound effects are also traditional and bonus features are few and far between, although there are a couple of special features. To throw in a modernistic twist, Barcrest have added the Big Bet feature to capture the interest of players.

The understated reels of Wild Times feature a collection of classic, glossy symbols. The higher value symbols are a red star and a blue star, while the lower value symbols comprise of a BAR, a melon, a plum, an orange, a lemon and cherries. There is also a wild symbol – you can’t miss it, it’s in bold letters – and this substitutes all other symbols whilst only appearing the second and third reels. Each time a wild lands and creates a winning combination, a ‘Wheel of Fortune’ appears in the reel position and randomly selects a multiplier value. Your win will be multiplied by the selected multiplier.

Furthermore, landing 2 wild symbols on an active pay line gives you in even better result. This is a Super Wild win, whereby the two selected multiplier values and multiplied with one another. This gives an overall total multiplier value of which your win will be subject to.

We mentioned earlier that there was a standard game, and there is also an enhanced game named the Big Bet. Players will notice the ‘BB’ icon to the right of the reels. When Big Bet is selected, your bet increases, to as much as £25.00 depending on which value you choose. Your pay lines also increase, from 5 in the standard game to now 27 ways. Your wild multipliers also increase, to as much as x10 in some instances. Furthermore, playing the Big Bet feature means that you receive 5 spins per game, with accumulative wins. Taking in these factors and the fact that the RTP increases from 94-96% in the standard game to 98% in the Big Bet game, we’d say this feature is well worth a shot, if you are in a position to increase your bet.

The Big Bet feature makes this game. It’s basic, but classy and offers a great deal more than many of the traditional-based  games out there.