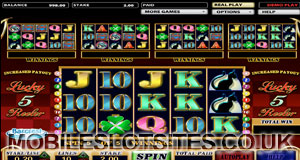 Lucky 5 Reeler is a Barcrest slot game, consisting of 5 reels and up to 10 paylines. The game itself is vibrant with good graphics and jazzy sound effects as you spin and win.

There are 9 symbols to look out for within the reels of Lucky 5 Reeler, and the one to watch out for is the eye-catching game logo ‘Lucky Reeler’ which of course, is the symbol of highest value (a whopping 50x your line bet if you manage to land 5 on a payline!) and this symbol also acts as the Wild. The other high value symbols – in keeping with the lucky theme – include the outline of Lady Luck, a four leaf clover and a black cat. The remaining, lower value symbols are the traditional playing card symbols A, K, Q, J and 10.

The unique and well-received feature of Lucky 5 Reeler is that a single game equates to five spins. So after placing a single bet, you can sit back and enjoy watching those reels spin five times, which enhances you bet and makes your money go further. The result of each single spin is recorded and displayed at the top of the screen during your game, and what’s more, during your game, any winning combinations of symbols will be held in position until the next spin, enhancing your chances of an improved prize. Even if every symbol within the reel window is in a winning combination, the whole reel set will be locked in position until the end of your set of five spins! Ultimately, your total prize at the end of each game will be the sum of each win from each spin.

What Lucky 5 Reeler doesn’t have to offer, surprisingly, is a bonus feature. Nevertheless, the game remains very popular due to the unique 5 spins per bet, which makes your money last longer.

Lucky 5 Reeler is a truly enjoyable game and of course the main appeal stems from the 5 spins per bet feature. Players love to watch how far their money can stretch and observe those prizes adding up after each spin. The game does lack a little bit of ‘buzz’ due to the lack of an exciting bonus feature, however this is an entertaining and unique game to play regardless.