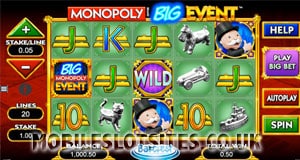 First, let’s look at the wild. It is a simple symbol, and can replace all other icons save for the title logo, and the jail icon. It can also offer you wins of 9,000 coins, if 5 appear on a payline. Now that we’ve dealt with the wild, what about the other icons it can’t replace, and the Big Bet?

The Big Bet feature allows you to win multipliers in the £20 game, whilst the £30 game offers you a bonus wheel, where you can win additional goodies for your game.

Landing 3, 4 or 5 of the Big Event Bonus icons will trigger the Big Event Bonus. You’ll either enter the bonus normally, with a house preview, or a hotel preview, based on how many respective symbols you located. These symbols can only appear on the first, third and fifth reels.

Once the bonus beings, the house and hotel sneak preview bonuses allow you to see the chance card positions of the active houses and hotels. Players must choose chance cards and community chest cards alternately. The latter offer cash prizes and free spins. Bonuses also include Dancing Wilds, and Locked Wilds. Once you have three of the same icon, that bonus will be added to a free spins round, and all your winnings are paid out.

There are plenty of special features in Monopoly: Big Event. It is a complex game, but with so many ways to win, it is no surprise that it has become such a hit in such a short space of time.