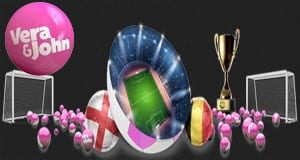 With all the St. Patrick’s shenanigans going on this weekend, you’d be forgiven for momentarily forgetting that the huge World Cup 2018 is just around the corner. All is not forgotten at Vera & John, however, who still have their eye on the ball; in fact they are gearing up for football thrills galore with an epic promotion. This means that you can enjoy the greatest ever football event with your favourite online casino!

There is an incredible, unmissable prize up for grabs that any fan of the beautiful game is going to love. Vera & John online casino is giving away the chance for a lucky winner and one guest to watch England vs Belgium on 28th June! That’s right, two of you could be flying to Kaliningrad to watch the big game, (all flights and transfers included). Meanwhile, runners up will win exclusive signed World Cup memorabilia!

So, what’s the game plan? This promotion is packed with tournaments; in fact there’s a tournament each week at Vera & John until Saturday 31st March. Then the final tournament kicks off on Wednesday 4th April until Saturday 7th April. Each tournament comes with a £2000 bonus prize pool; this will be split between the players who land in the top 70 places on the leaderboard! Position yourself within the top 10 on any of the tournament leaderboards and you’ll receive an invitation to the exclusive World Cup final in April. In the final tournament, get the chance to win your all-expenses paid trip to Kaliningrad Stadium to watch England play Belgium!

All you have to do is score the most wagers; earning a point on the leaderboard for every £10 of real money staked on any Vera and John slot game. If you just miss out on that top spot in the final tournament, you can still win an excellent prize. The player in second place will receive a signed piece of World Cup memorabilia worth £500, whereas the third place player will receive a signed piece of memorabilia worth £300. All first class prizes for the ultimate football fans!

If you’re a lover of the game then this one isn’t to be missed; don’t watch from the sides but instead kick off your best game ever and grab yourself tickets to the World Cup 2018 with Vera & John!