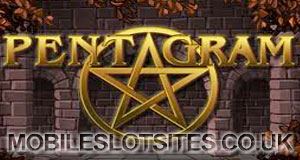 Realistic Games are the geniuses behind the Pentagram slot machine game, which is easily one of the most popular classic slot games of all time, at least in the online casino world. This title doesn’t cough up wins very often, but when it does it pays out royally. Pentagram is in essence a fruit machine, although its single pentagram symbol is what gives the slot its title, and its features. Pentagram is played over 3 reels and 5 paylines. You won’t be able to adjust your paylines, but you can wager anything from 25p up to £50 a pop in this game, and that certainly has its perks as you try to win a major cash prize. That biggest of those perks is that the more you wager, the more you can win, with the top prize being capped at 250x your total bet.

There is one special feature in this game, and it comes from the pentagram ion. Land 3 of these anywhere on the reels, and you can win 10 free spins. During the bonus the pentagram icon will double whatever you have won thus far. This, as you can imagine, can result in some absolutely huge wins rapidly coming your way. This is the only real special feature to appear in Pentagram.

The Pentagram classic slot is very much all about the bonus round. You need to strike that bonus in order to bag the big bucks. It is not as difficult as you might think, but it certainly won’t be a walk in the park, unlike other slot machine games.