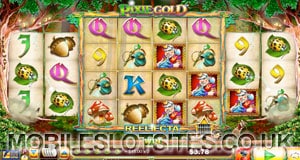 This video slot has been designed and developed by Lightning Box Games, and is one of their more popular slots. It is not difficult to understand why. The slot features an amazing 1,296 ways to win, which is an extraordinary number of paylines to play with. This isn’t the only thing which is extraordinary about this slot. Pixie Gold slot contains a total of 8 reels, with 4 main reels stealing the show. You can adjust your coin values from 1p up to £2 a pop, and that will see you wager anything from 50p a spin, up to £100 a spin. Understandably, paylines are non-adjustable. At most, you can win 250x your total bet with this slot game.

If you should land the pixie icon on the reels, then you will have identified a wild symbol. This wild symbol can replace all others, save for the King Star icon. Wilds do not offer cash wins on their own, though.

Should the player land a King Star icon on the reels, but directly above the cart symbol, a Pixie Spin will be offered to the player. This consists of a re-spin. During the re-spin, a wild pixie will be added to the second reel of the game.

A gamble feature has been included in this slot, but it is hardly worth trying out, since you stand a 50% chance of success or less.

As mentioned, there are four additional reels in this game, and they appear in the centre of the screen, in the middle of two sets of 2 reels. These are known as the Reelfecta reels. It technically counts as a single, 16-position reel. Wilds can only appear within this big reel, or on the second reel during the free spins feature. This provides you with an added way of winning, even if it is slightly unconventional.

Pixie Gold slot is unusual, it is strange, and it is certainly not the norm. At the very least, you may wish to give this slot a run for its money, just to see if its gameplay suits you.