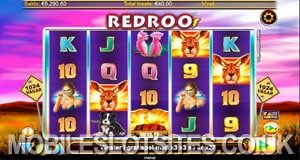 Red Roo is a Lightning Box Games creation; a 5×4 online video slot featuring a theme we don’t stumble across too often. That theme is Australia, if not obvious by the title, with the majestic, native red kangaroo as the main character. Set in the vast, scorching Aussie outback with a stunning pink sunset, the reels are filled with an abundance of animated visuals associated with our friends down under. In fact, it’s enough to make you want to grab a stubby and your backpack, while heading off on a gap year. There is also a huge 1024 ways to win in this vibrant game, plus a 95.30% RTP. Throw in a great free spins bonus too and you could be saying ‘G’day mate’ to a lovely cash prize in your bank roll soon enough.

Blond surfer dudes and tanned surfer babes, a red kangaroo, an Australian Shepherd dog and a pink parakeet; you’ll find the Red Roo reels are filled with heaps of clichéd Australian imagery. No complaints from us! You’ll also discover the lower value symbols are classic playing card icons, and the wild symbol is none other than the mesmerising Ayers Rock (or Uluru, as called by the natives). The wild rock symbol features on the central 3 reels only, and will substitute all other symbols in the game except for the scatter. An outline of Australia is the scatter icon.

Landing 3, 4 or 5 Australia scatter symbols anywhere on the reels is what you’re really after in Red Roo. You’ll receive a super generous 8, 15 or 20 free spins respectively. The bonus game transforms the design, and the Red Roo reels are now set on beautiful beach. Meanwhile, the free games are topped off with any wild rock wins to be multiplied by up to 27 times. In addition to this, should you land 2 more Australia scatters, you’ll be granted an extra 5 free games! The bonus doesn’t seem too difficult to trigger either, therefore you have a potentially lucrative couple of bonus rounds if you’re in luck.

The visuals in this game truly capture your imagination; the gameplay uncomplicated and smooth, making Red Roo an effective choice if you’re looking for laid-back, relaxing play. Also, we’ve gotta say Fair Dinkum to all those bonus free spins. Bonzer!