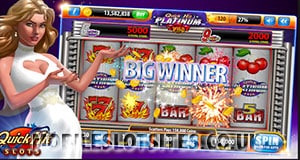 There are a number of Quick Hit slots which have been developed by Bally Tech. This one is Quick Hit Platinum, and it is the best of the bunch. The mobile slot features your customary classic slot icons, such as berries, bars, sevens and bells. It also offers coin values which stem from a penny up to £15.

Even though you cannot adjust the paylines on this 5-reel, 30-payline video slot, wagers are fair. You’ll be staking between 30p and £450 a spin. You can win as much as £37,500 playing this game, though, due to its non-progressive jackpot being so high.

The wild icon is easy to spot, and it is also the top paying symbol in the game. Wilds will substitute for all other icons, excluding platinum icons, free spins and Quick Hit icons.

If a player lands three, four or five of the platinum icons within one position of the first payline, they will win 2x, 25x or 5,000x their stake, respectively.

When any three free spin bonus icons appear within one position of the first payline, on the second, third and fourth reels, the player will trigger the free games bonus feature. Players must select a symbol from the 20 tiles represented, to reveal a number of free games. When the player matches three tiles, they will win either 5, 7, 10, 11, or 15 games with a 2x multiplier, or 20 free games with a 3x multiplier.

The catch with Quick Hit Platinum is that you must get the scatters within one position of the first payline. That is certainly not easy to do. So, although there are lots of special features in this slot, your chances of triggering them are not very high.