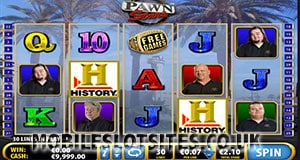 Pawn Stars is a rather bizarre slot, which certainly has its audience. It is based on pawn-traders, or pawn shop owners, and is in part designed by Bally Tech in coordination with the History Channel.

Confused? You should be. Pawn Stars is played as a 5-reel slot, which features 30 paylines. The game contains coin sizes of 1p up to £15, which means that you can expect to bet set back anything from 30p per spin, up to £450 per spin. You won’t be able to choose your lines, but you can still win up to £7,500. That’s a rather luxurious sum for a slot about pawn traders.

The various pieces of the Pawn Stars sign make up wilds in this game. If you land all three on the same reel, you’ll have bagged yourself a stacked wild. Wilds only appear on the second, third and fourth reels, and offer 2x multipliers in the free spins game. Wilds cannot replace scatter icons.

The free spins ring icon will trigger a free spins bonus, if three appear on the first, third and fifth reels. In the free games bonus, players can enjoy 10 free games, though despite picking up a 2x total bet prize, they won’t get any multipliers in the feature.

If a player lands three of the Pawn Bonus scatter icons on the second, third and fourth reels, then they will be taken to the Pawn Bonus feature. Here, they will be offered a deal of between 200 and 3,000x their line bet. They can refuse or accept the offer. If they refuse, a secondary offer of between 150 and 4,000x their bet will be made. Players must accept the second offer if they have refused the first.

Pawn Stars has elements of the pawn shop business about it, such as the Pawn Bonus feature. However, this baffling title is certainly not going to appeal to all players. If you like quirky, one-of-a-kind games, then Pawn Stars could be your play. It won’t be everybody’s, though.