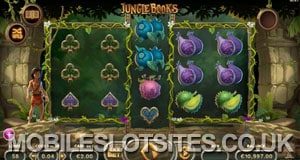 Jungle Books online slot is, of course, based upon Rudyard Kipling’s world famous 1894 novel, The Jungle Book. A Yggdrasil developed game that is brand new for September 2017; this mobile slot comes with all the HD visuals, mesmerising animations and special features even the most experienced gambler could wish for.

Set deep within the thick, dark jungle, this game is dramatic and intense. There are 5 reels and 3 rows, a 96.1% RTP and a win both way element to the pay lines. The game features a variety of realms, in which the number of fixed pay lines differ.

This intriguing slot game features 5 characters: you and I will recognise them as Mowgli, Bagheera, Shere Khan, Kaa and Baloo. Though for the purposes of the game which isn’t officially linked to the book, these are known as the boy, panther, tiger, etc.

Each character has his own realm and two special features. The reels travel through the realms at random as you progress through your game. Realm host are present to the left of the reel while granting their 2 special features. However, hosts can leave a realm, causing the realm to change and the host to become a guest on the right hand side, as a new host emerges.

Under Bear’s Realm, land a honeycomb bonus symbol and pick one hidden prize from the honeycomb. A coin reward will be revealed.

The character realms in this game are undoubtedly the most exiting feature, but let’s not overlook the quality of design, graphics and detail that has gone into this production. A thoroughly enjoyable game for an experienced gambler; perhaps the game features might be a little complex for a newbie. Top marks from us.