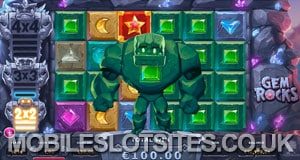 Gem Rocks is an online and mobile slot game produced by innovative gaming giants Yggdrasil. Featuring an incredible 4096 ways to win, this 6×4 reel video slot is made up of colourful rocks with precious gems embedded into them. There are 8 regular symbols that pay out if at least 3 of a kind are present in consecutive columns, starting from the leftmost. This powerful game doesn’t have a bonus game or free spins, but there are a couple of special features that could enable you to win up to a whopping 9000 times your stake. The RTP for Gem Rocks is 96.2%. Stay with us to find out more.

These boulder-style reels feature an abundance of vibrant rocks, with the highest paying symbol (by a substantial amount) being the rock with the red star gem embedded. Other higher value symbols are the yellow moon gem, the green circle and the blue triangle. The remaining rock gems are lower in value.

Create one of the 4096 winning combinations upon the 6 reels by collecting 3 identical symbols in consecutive columns from the left at the end of any spin. Gem Rocks features ‘dropdown wins’; you’ll have come across these before but may be more familiar with the terms ‘cascading reels’ or ‘avalanche feature’. In essence, striking any winning combination causes the winning symbols to disappear, while allowing new symbols to drop into their place. This, of course, creates another opportunity for a win

Gem Rocks might be lacking a bonus game but don’t let that put you off. Instead, there is a frequently appearing special feature called the Gem Rock Feature, that can occur during winning spins. This involves a Monster Rock appearing after 2, 5 or 9 dropdown wins consecutively. The friendly Monster Rock appears as a particular colour, and then merges onto the reels as a block of symbols of that particular colour, e.g. if a yellow monster appears, the block will be the yellow moon gem symbol. After 2 consecutive wins, the Monster Rock symbol will be of 2×2 structure. After 5 wins, it will be 3×3, and after 9 wins it will be a very lucrative 4×4 in size!

Gem Rocks works fantastically well on smartphones and tablets as well as your desktop. It looks fab and there is something soothing in the sound of those cascading rocks as the hit the ground. A great Yggdrasil development; this is a simple game with the thrill of the Monster Rock to keep you engaged. Stick it on autoplay, observe the dropping rocks and hopefully enjoy a few impressive wins from those 4096 ways to grab some coins!