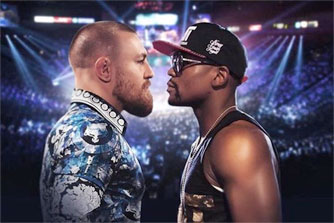 This August, Bgo mobile casino has got a knockout of a promotion for us! Many of you will know that on August 26th, one of the most lucrative ever boxing matches will be going down in Las Vegas, Nevada.

Its nickname being ‘The Money Fight’, the match features Mayweather vs. McGregor, and tickets worth thousands of pounds are sold out for this hugely anticipated fight. Held at the T Mobile Arena in Vegas, we can all only dream of attending such an exclusive event. All but one lucky Bgo winner, that is….

That’s correct. The gloves are off, and Bgo players are currently fighting for the 1st place spot in this thrilling, fast-paced promotion. Before you dash off to the promotion fighting ring, let us give you the low-down so that you’re fully equipped and ready to go!

Bgo have one super luxurious trip to Vegas, from the UK, up for grabs, complete with two tickets to the sold out ‘Money Fight’ at the T Mobile Arena. Enjoy a VIP stay in Vegas at the luxury 5 star Wynn Hotel, with spending money and return flights included. To win, be sure to register with Bgo in the first instance, and receive one ticket into the main prize draw for every £50 cumulatively wagered on any Bgo game.

Players can collect an unlimited amount of prize draw tickets, so the more you wager and play, the better your chances are of winning this once in a lifetime prize! Wager until Sunday 13th August, then sit back and await the exciting results when the final draw takes place on Monday 14th August.

There’s more, too; if you’ve just missed out on the desired top place, there are plenty of fantastic prizes for 49 lucky runners up. From a MacBook Pro for the second-place winner, to an iPhone 7, a Samsung TV and an Apple Watch, there’s plenty to go round. Players from 11th to 50th place will even win the Pay Per View Mayweather vs. McGregor fight live at home.

If that’s not quite enough, there are daily prize draws too! You could win £100 cash every day throughout the promotion. This is no lightweight offer! We’re talking plenty of great prizes up for grabs, so don’t throw in the towel – hurry on over to Bgo today and put up your best fight for that ringside seat.