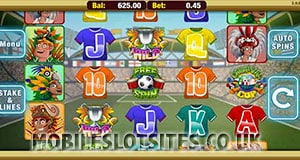 This game from Nektan was designed specifically as a companion to the World Cup that took place in Brazil in 2014. It celebrates all of the festivities surrounding that event while incorporating many of the sites onto the spinning reels.

The game board has a stadium for a background. You’ll see both the playing field as well as the thousands of spectators watching the game. As you spin the reels, you’ll hear loud marching band music. When the reels stop, you’ll hear a referee’s whistle indicating the spin has ended, but the music will start up again if you have a win.

About half of the symbols in the game display excited local fans in their native headdress. There are also five symbols taken from a deck of playing cards, but unlike most games which show these symbols in an uninteresting way, Carnival Cup puts them on the front of football shirts. They look as if they are the names or numbers worn by players. All the shirts have a distinctive colour, much like the uniforms worn by each team.

Carnival Cup is a 5-reel game with 9 pay lines. You can choose how many reels you want to activate on each spin as well as the amount you want to gamble on each reel. Each spin can cost as little as 0.01 or as much as 450.00. The maximum payout for a spin is 2500.00 coins.

The Wild symbol in this game is a Championship Cup. It is properly ornamented with the word Wild emblazoned on the bottom of the symbol. The Wild substitutes for all symbols except the Scatter.

The Scatter symbol in the game is the Free Spin logo, which is a football sitting in the middle of a decorative design. You need to get three of the Scatter symbols to trigger free spins.

Although the 2014 World Cup has been completed and is now a fading memory, Nektan designed enough entertainment into this game so it can continue to provide enjoyment.