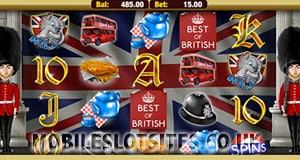 This is a new game from Nektan Slots that features all things associated with Britain, or perhaps more accurately, with London. You’ll see some of the famous features of the city spinning on the reels.

The symbols in Best of British can become stacked on any of the reels, thus increasing your chance for a win. Among the symbols are the famous red double-decker busses of London.

Another of the symbols is a Constable’s hat. You’ll also see the Britains’ favourite drink, a pot of tea. There is also a view of the country’s preferred meal, Fish and Chips. All of these symbols appear on a game board which has the British Union Jack as a background. You’ll also see royal guards standing to the side of the reels.

The Wild symbol in this game is a British Bulldog. He is standing in front of a British flag and has a big smile on his face. The Bulldog substitutes for any other symbol except the Scatter symbol. If you get three Wild symbols on a winning pay line, the payoff will be the same as a 5-of-a-kind win.

The Scatter symbol in the game is the Spin Logo. It is displayed on a sign similar to the ones you see in London’s underground Tube. Three of the Scatters leads you to the bonus round. though you’ll have to get all of the Scatter symbols to get the bonus. They are only found on reels 1,3 and 5. If you get all three, you’ll receive a generous 30 free spins,

This Nektan casino slot does not offer huge payoffs, but its stacked symbols feature, which includes the Wild symbol, will increase your chances to win. And if you are able to spin your way into the bonus round, you’ll have an ample amount of spins to help you collect.