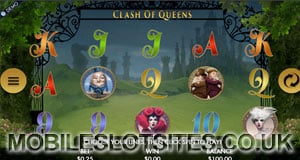 Genesis Gaming’s Clash of Queens is a 5-reel video slot, and one which is very loosely based on Alice in Wonderland. This slot features very cool graphics, and is easily one of the better looking games to be unveiled by this developer. Clash of Queens is designed for mobile users, and its display clearly reveals that. The game offers you a total of 25 paylines to bet on, whilst you can also adjust your bets using the bet button. Up to £500 worth of bets can be made on any one spin in this slot, making it one of the larger high-rolling mobile slots out there. With a pay-rate of 95.65%, this slot is also pretty generous when it comes to doling out the winnings.

Play Clash of Queens at

Players are going to want to keep an eye out for the scatter symbol. This shields and spears can trigger scattered wins, which can be worth as much as 2x, 5x, 10x, or 50x your total bet when you land 2, 3, 4 or even 5 such symbols anywhere on the reels.

Wild symbols are also present in this slot, and can substitute for all other icons in the game. As usual, the exception to this rule is scatters. Wilds cannot replace those. When one or more wilds appear, the highest win is always paid out.

Clash of Queens’ bonus round is triggered by landing the Red Queen on the first reel, and the White Queen on the fifth reel, or vice-versa. When this happens, players will choose either the Red or White queens. The queens will then do battle on the screen. Free spins and multipliers are then handed out based on who wins the battle. It is possible in the free spins bonus for players to land expanding wilds on the second to fifth reels.

Graphically, this slot has some really awesome imagery. Even from a gameplay point of view, there is a lot to like about it. Ultimately, Clash of Queens is going to appeal to all players who fancy a bit of excitement in their video slots, and the game is most certainly going to be a hit for Genesis.