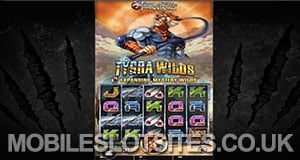 Blueprint Gaming are taking us back to the 80’s with their latest branded online slot release: Thundercats. Too young to remember this hugely successful animated TV show? Don’t disappear just yet – Thundercats slot is a hit in its own right. Proudly doing this popular show justice, Thundercats is a 5 reel, 4 row and 30 pay line game. If you’re looking for a visually phenomenal mobile slots game – this is your jackpot, as Thundercats looks best when played on your mobile device. It features striking and powerful imagery taken straight from the show, with an abundance of top characters and modern effects.

In addition to its epic design, Thundercats slot offers heaps of exciting modifiers which can be triggered randomly at any point, as well as expanding reels and a variety of thrilling bonus rounds. The game has an RTP of 95.5%.

First impressions of the reels might provoke thoughts of half of the screen having gone to waste, since the reels sit within the bottom section of the game. There’s a good reason for this, however. The reels can expand upwards, as much as 8 reels high. This occurs randomly and frequently, boosting the chances of scorching wins, you’ll be pleased to learn!

The Thundercats reels feature visuals galore from the show, as well as the Thundercats logo which is the wild, and also the highest paying symbol. The panther logo symbol is the bonus; 3 of them landing in view with give you the Thunder Reel Bonus.

Landing 3 bonus symbols will trigger the exciting Thunder Reel Bonus. There are 5 varieties of free spins bonuses, and which one you get will be decided by spinning the Thunder Wheel. Players have the option to gamble their bonus round.

Alongside these impressive free spins bonus rounds, if a special symbol lands on the fifth reel in the main game, a wheel appears and spins to a different character. The player can select the character or choose to respin.

Thundercats is an excellent game and Blueprint Gaming have truly pulled out all the stops with fantastic gameplay, non-stop entertainment and impressive visuals. Be sure to try it on mobile for the best possible experience.