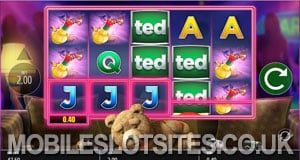 Ted is a Blueprint online & mobile video slot based on the 2012 hit comedy film featuring the teddy bear famous for his mischievous behaviour and inappropriate comments. Bursting with animations and design taken straight out of the film, Ted will be an instant hit with movie fanatics. For those not so familiar with the film, this online slot is nevertheless visually appealing with bold and modern features. The symbols lie on a 5×3 reel grid that offers 20 pay lines, and Ted also offers an incredible amount of bonus features. Also noteworthy is the potential return of 95.80% and maximum winnings from a single game being £250K or 10,000x your bet, we’re sure you’re keen to get to know this roguish teddy bear’s game a little better.

Reel symbols are taken directly from the movie and fit right in with Ted’s naughty personality: beer bottles, an attractive lady, a goose, the Ted logo and so on. The lower value symbols are classic card symbols from Ace to Jack. The Ted wild symbol substitutes all symbols in the game apart from the scatter; the Thunder Buddies Bonus icon. Three of these on the reels triggers the Thunder Buddies Bonus feature.

Landing the Thunder Buddies Bonus feature initially provides players with the opportunity to select 1 of 5 bonus games. Spin the wheel to select the game, and you’ll even have the chance to gamble your bonus game type for another if you so dare. The 5 bonus games are:

Each bonus game comes with a variety of straightforward tasks, all movie-related. These include spinning wheels, heaps of wild symbols and plenty of free spins, and therefore often a fairly lucrative outcome.

In addition to the varied bonus features are the modifiers that Ted can trigger at random during any spin in the main game. There are 6 of these as follows:

Ted is a totally unpredictable and exciting slot game that will probably appeal to movie fans in the first instance. However , non-fans should be equally as keen on Ted if they give this unique game a try. It has one of the broadest ranges of bonus features and modifiers that we have ever seen; therefore you’ll be kept on your toes and entertained for days on end. Furthermore, Ted is an extremely well-designed video slot with top notch gameplay and a cheeky, potty-mouthed teddy bear to boot. What’s not to love?