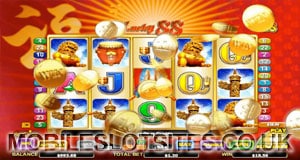 This Aristocrat developed online slot machine game has become quite a popular Far Eastern themed title over the last year or so. Aside from a few images, and its red background, there isn’t too much in the way of oriental imagery to impress in the game. Even so, this slot contains 5 reels and 25 paylines of gaming action, as well as cheap bets. At its very cheapest, players can wager just 2p per line, per spin. If they wish to play with the Extra Choice side bet, as well as on the maximum stake, wagers will cost £120. The Extra Choice side bet always costs an extra 20% of your total bet. On the plus side, you can win as much as 888x your total stake in this slot.

The man symbol is the wild icon in the game. Wilds can replace all other symbols in the game, barring scatters. They also serve two other purposes. Firstly, they represent the best paying icon in the game, and if a player land 5 on a line they will in the jackpot. Secondly, they offer multipliers worth 2x, 3x, 5x, 8x, 18x, 38x, or 88x when they appear in a win. These triple-function wilds are hugely important in this game.

Scatter icons can also trigger a free spins bonus round, or a lucky dice feature. The choice is yours. If the player has selected the Extra Choice bet, then they will have enhanced features in the free spins bonus. These extra choice features include multipliers and wilds. Players will win a total of 3, 8, 15 or 25 free games in this feature. Should they choose the dice feature, then players can roll the dice and pocket prizes for every 8 they win. Again, the Extra Choice feature enhances this bonus.

It is important to note that there is a big difference between the playing the bonus games with the Extra Choice bet or not. You may not trigger them often enough for it to be of use, though, and that’s the risk. In other areas, this game is quality, though.