Super Pan 9, or simply Pan 9, as it’s sometimes called, is a common variation on the popular casino game Baccarat. Whilst the game is popular in the US, it is fairly uncommon at online casinos, although you may find it on a few sites.

Super Pan 9 has a few gameplay and rule differences to traditional baccarat. On this page, you can learn all about those differences and the basics of how to play Super Pan 9.

How to Play Super Pan 9

As a direct variation of classic baccarat, Super Pan 9 uses the same scoring system and general gameplay as the original. If you’re not familiar with classic baccarat, however, fear not as we’ll cover everything you need to know here.

The Aim of the Game

The aim of Super Pan 9 Is to reach a higher combined card total than the dealer.  The main difference, however, is that Super Pan 9 utilizes player banking instead of house banking.

This means that the winner is paid out from the players around the table, instead of by the bank. 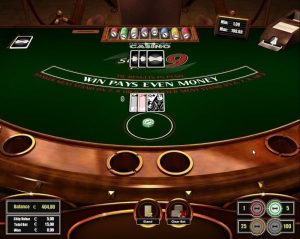 Super Pan 9 is played with between eight or sixteen decks of cards, depending on the house rules. In most versions of the game, however, twelve decks of cards will be used.

In Super Pan 9, the cards hold the same values as they do in baccarat:

The classic baccarat scoring system is also in place, which means that if a player has a combined card total of double digits, the ten is subtracted. So, for example, a hand of 5/5/6 (which mathematically equals 16) would total 6.

The Differences between Super Pan 9 and Baccarat

The main difference between baccarat and Super Pan 9 is that players aren’t given two hands to wager on. Instead, they go head to head with the dealer.

Another difference is that, in Super Pan 9, players start with three cards rather than two.