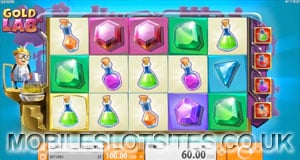 Every laboratory has a mad scientist, right? Well Gold Lab certainly does – it’s a new online slots game from Quickspin, whose persistent experimenting has brought us a new bonus feature by the name of Golden Bonus. Gold Lab is set within a clean and polished lab with vials, chemicals and potions galore. The reels are set upon a large scientific device and to the left of it, stands the pleasant, but probably crazy scientist. There are 5 reels, 3 rows and 25 pay lines, plus colourful symbols galore adorning the reels. The sound effects and graphics might not be of the highest quality but we think you’ll like Gold Lab’s bonus feature.

The reels display a vibrant collection of symbols. The lower value icons are the vials of potions; these come in 4 varying colours. The higher win symbols are the 5 brightly coloured jewels. In addition to these, there is a gold Wild symbol and a Golden Bonus symbol. The Wild substitutes everything but the Golden Bonus symbol.

The Golden Bonus scatter symbol – which can be any of the 4 colourful vials within a golden frame – lands on the first, third and fifth reels only. If 3 land, then 4 respins are activated. Depending on which beaker-type was the Golden Bonus symbol that triggered, the corresponding beaker symbols on the reels will be transformed into wilds. This is for the rest of the bonus game. This reoccurs with each Golden Bonus that lands, until the end of the bonus game. Furthermore, whenever an additional Golden Bonus symbol lands, you are granted yet another re-spin. We found that this feature triggered very frequently and can prove to be quite lucrative.

The best part for us while playing Gold Lab was the frequency of occurrence of the Golden Bonus feature. It’s a great, unique bonus game and makes Gold Lab all the more enjoyable as it triggers so often. Gold Lab is a good game; it will never score highly in terms of design, graphics and such, but it is easy to play and one that might be appreciated more by the newer online slots player.