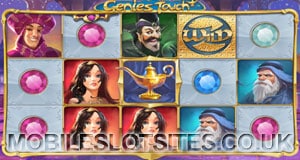 Genie’s Touch is a new Quickspin developed slot, and one which is based on the Arabian Nights tale. There are so many slots with this theme, that this slot will have to be quite original to break new ground in the genre. It is just that, with the game being released as a mobile slot above all else. Genie’s Touch is played with several cartoony style characters, and plenty of gems on its reels. It also allows you to total bets of 20p per spin, up to £100 a spin. You will not be able to alter any of the 20 paylines appearing in this 5-reel slot. Players can win upwards of 1,250 coins in the mobile slot machine game.

In order to win that big non-progressive haul, players will need to land 5 wilds on a payline. Those wilds appear as golden emblems, and can replace all other symbols save for bonus and scatter icons.

Those scatter icons are magic lamps. When they appear 3 or more times on any spin, anywhere on the reels, they will trigger the feature in this video slot.

Land 3 of the bonus icons on a single spin in any positions on the screen, and you will trigger a free spins bonus game. Players will be given a total of 10 free spins to play with. During the free spins bonus round, extra magic lamp icons are added to the reels.

If you did use the magic lamps to trigger the slot’s bonus feature, you will enter the Genie’s Touch bonus. In this bonus, the magic lamp will turn an adjacent symbol into a replicating icon, which will replace all selected icons and other magic lamp icons with identical symbols. It is a very nifty feature to have, particularly if you have reels filled with high-paying icons.

Genie’s Touch is an advanced mobile slot machine game. It looks good, plays well, and can be found in all good mobile casinos which are currently offering Quickspin software.