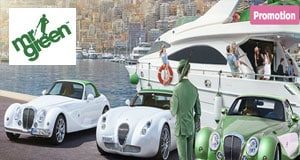 Get your game-playing into full gear, for Mr Green is about to take you on the ride of your life! How would you like to win a luxurious holiday to Monaco, with tickets to the glamorous Grand Prix? For a truly unmissable promotion and unforgettable experience, take the fast lane over to Mr Green online and mobile casino as they give away an incredible once-in-a-lifetime holiday as well as £35,000 in cash prizes!

The Grand Prix is, of course, the grand prize in this promotion that runs until 2nd  April. Bag yourself two flights to the French Riviera, with 2 nights’ luxury 4* accommodation for two. As if a Monaco trip isn’t fabulous enough, Mr Green is also throwing in 2 tickets to the incredible final day of the Monaco Grand Prix, in an Upper Grandstand. You will also have £500 spending money to enjoy!

So, we know you’re itching to get to the start line. How do you join the race? From Friday 23rd March until Monday 2nd April, you can race to the finish line by scoring “the biggest win on a single spin” on any of the qualifying slots. You will need to stake at least 50p on your spin to qualify. You can keep an eye on your position in the competition by watching the leaderboards for each qualifying game during the promotion.

So, choose your slot:

…and get racing towards that grand prize! The top 500 players with the largest win on one spin at the end of the promotion will each win a prize. If you’ve grabbed the largest win on your single spin, you and a friend will be jetting off to the Grand Prix on the French Riviera in May, so what are you waiting for? Buckle up and join the race!