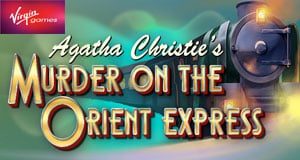 Chugging its way to us this month is the hugely anticipated, brand new, Yggdrasil-developed online slot: Agatha Christie’s Murder of the Orient Express. If, like us, you are steaming with excitement at the prospect of this newest release, you’re going to simply love Virgin Games’ latest promotion. Get ready for the online slot murder mystery of the year with cash prizes galore.

We’ll give you a (rather large) clue: play this exciting online and mobile slot for a chance a super prize! Murder on the Orient Express is your ticket to mystery cash prizes in the Box Bonanza game.

Murder on the Orient Express is the hottest new game around. Only released this month, there has been widespread anticipation as Yggdrasil release another innovative game featuring 4 games in 1. If you’ve played Yggdrasil’s new Jungle Books, you’ll recognise the format we mean. Based on Agatha Christie’s incredible detective novel in which a lavish train journey unfolds into the ultimate murder mystery, this 5 reel and 20 pay line slot is as thrilling and exhilarating as the book itself. Travel between destinations, trigger free spins, encounter walking wilds, random wilds, win multipliers and wild reels along the way. Although the theme is fresh and exciting, it’s the gameplay itself bringing an abundance of features to uncover. The perfect game to unravel as part of a sensational new promotion.

Virgin Games players (and non-players – sign up now!), simply opt in to this promotion, deposit and stake at least £30 on Murder on the Orient Express between Friday 3rd November and Thursday 9th November. By doing so, you’ll be securing your opportunity to play the promotional Box Bonanza game on Friday 10th November. Mystery prizes await! Just click ‘play’ and select one of the three boxes presented on screen to reveal your secret cash prize. Could it be a whopper?

This is a great way to explore the latest Yggdrasil release! Furthermore, you could be pocketing a delightful lump sum for your efforts. Deposit £30, then sit back and indulge in the lavishness of the Orient Express – perhaps not by travel, but by spinning those luxury, mystery reels nonetheless.