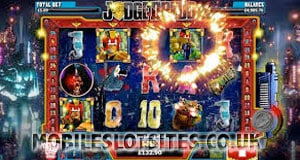 When NextGen Gaming announced that they were going to release Judge Dredd, everybody was exciting. Yet, this slot’s launch was delayed so much that great expectations were had. Judge Dredd didn’t really live up to them, which is shame, because this slot is promising.

Judge Dredd is a 5-reel slot, based on the comic book and film hero of the same name. It features the usual NextGen super bet feature, and can see players able to stake anything from as low as 0.35 per spin, up to a high of 100.00 per spin. It costs a little more than your average slot from this developer.

Judge Dredd acts as the slot’s wild, and when the super bet feature is activated, wilds appear on the reels much more frequently. They are still wilds, though, so they can replace all other symbols in the game, but not the scatter icon. It is up to you if you wish to play with the super bet feature or not.

An I Am the Law bonus is a randomly triggered feature in this game. After any winning spin, you may pick up a multiplier worth between 5x and 10x your total winnings, which is decent enough.

It is those scatters you want to keep an eye out for, though. When 3 or more of the Judge Dredd badge icons appear in any positions on screen, you will bag a free spins bonus. This bonus consists of 10 free games, with all of your winnings in the feature doubled. Judge Dredd wilds appear even more frequently in this bonus game, and players can retrigger the feature by landing additional scatter icons on the reels.

For the life of us, we can’t understand what the holdup was with Judge Dredd. There aren’t any inherently original features in this slot, so it shouldn’t have taken so long to be released. Nonetheless, it was, and the features in this game aren’t really any different than those which can be found in your typical new NextGen Gaming video slot. Judge Dredd just costs more to play.