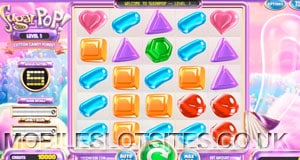 Sugar Pop is a particularly big slot for BetSoft Gaming. It has done the rounds at online casinos across the net, and it a very popular title. It is all about sweeties, candy, and other sugary goodies. The slot was launched around the same time that Candy Crush Saga became huge, so there’s no surprise it became popular. Sugar Pop is scarcely a video slot, and one which offers a non-progressive jackpot to be won. The slot is not your ordinary run of the mill game, and it can cost anything from 2p per pop, up to £50 a turn. Many players fancy it as more of an instant win game, than a true slot.


The basic premise of Sugar Pop slot is to make winning combinations of candy on the screen. There are 5 reels of candy present, and once players have landed wins in specific spots on those reels (to fill a pattern located to the left of the reels), they will advance to the next level. If you could say it had paylines, then there would be roughly 4 different ways to win in this game.

The more levels they climb, the more advanced the special features become.

There isn’t a bonus game as such in this slot – if you could call it a slot. Instead, there are a host of special candies which do various things. Some candies explode others that are nearby, and others turn candies into the same colour. Some will act as wilds, others as sticky wilds, whilst some offer second chances. There are special candies which will take random paths to gather you wins, and others which will offer you multipliers for your wins. The sheer volume of different special features via these candies is quite remarkable.

Sugar Pop will not be for everyone. There will be those players who find it far too removed from the slot world, or traditional slot format to play. There will also be those who see it as a unique title, and one which is generous with both its special features and its wins. The only real way to know if Sugar Pop is for you is to try it.