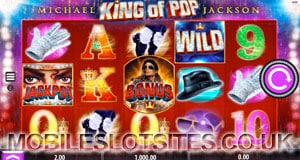 Michael Jackson: King of Pop is the only official Michael Jackson themed video slot to be released on the net. Bally Tech are the creators of the cracking slot machine dedicated to the King of Pop himself. The new slot offers 5 reels and 25 paylines of glittering, officially licensed gaming, with an awesome soundtrack and superb imagery present throughout. Michael Jackson: King of Pop is a cheap enough slot to play, too, with wagers ranging from a low of 40p per spin, up to a high of £80 per spin. With a bit of luck, you would expect to win as much as 2,500 coins with this non-progressive video slot.

There’s no shortage of special features in this slot. Michael Jackson: King of Pop contains wilds, scatters, free spins, and a wheel bonus. Moonwalk wild symbols are capable of appearing on the second, third, fourth, and fifth reels of the slot, and they count as both bonus and wild icons. Moonwalk wilds can also double the value of wins in which they appear. They can even appear stacked on occasion.

The Wheel Bonus is triggered by landing bonus icons on the second, third, and fourth reels of the slot. Once the wheel bonus is triggered, players will win either free spins, or cash prizes, as well as multipliers.

There are two free spin bonuses in the Michael Jackson: King of Pop slot. The first is known as the Beat It free games bonus, and it offers 10 free spins with any wilds which appear, remaining sticky during the bonus.

Michael Jackson: King of Pop has the soundtrack, the graphics, and the special features to not only honour the king of pop himself, but to also become one of the biggest hits of 2016 in the online slot world.