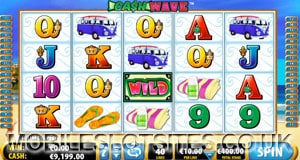 Cash Wave is a rather generic video slot, released by Bally Technologies. The slot is themed on a tropical beach, and instead of waves crashing on the shore, you’ll be hoping cash does instead. It is a pretty cheesy title. The gameplay itself is so-so, which is a bit disappointing for a developer with a pedigree such as Bally Tech. Cash Wave is played over 5 reels and 40 paylines, with players able to wager anything from a floor bet of 40p per spin, up to £400 per spin. Paylines cannot be adjusted in this video slot, which carries a top paying non-progressive prize of 500x your total stake.

Wild symbols are present in Cash Wave. Wild symbols are capable of cropping up on all of the reels of the slot, and can replace all other symbols in the game with the exception of the free games scatter icon.

The free games scatter icon is easily identifiable (since it has “free games” written across it). This symbol can trigger the game’s solo bonus round if it appears on the second, third, and fourth reels of the slot at once.

Cash Wave is not a bad slot at all. However, one would expect a little more from this slot, given that you are going to have to wager 40p per spin at the very least. All the same, Cash Wave makes for an exciting introduction to the slot world for newbies. For more experienced players, there might not be too much to shout about in this slot.