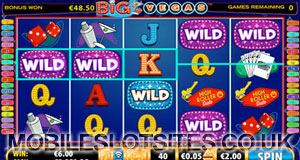 Bally Tech’s Big Vegas slot is big indeed. Played over 5 reels and 40 paylines, this slot is very much all about Las Vegas, with imagery such as roulette wheels, and other Vegas casino games appearing on its reels. Big Vegas also costs a fair bit of cash, too. Playable from 40p per spin, and costing up to £400 per spin at its costliest, the slot is something of a high variance title. You can win as much as 300x your total stake when playing the Big Vegas slot, but as we’ve said; it is a high variance slot so wins don’t occur frequently, even if they are somewhat considerable in size.

In order to win the maximum amount in this slot, players will need to line up 5 fruit machines on one of the slot’s forty paylines. A wild symbol is also present in this game, but aside from substituting for all standard paying symbols, it doesn’t do anything out of the ordinary. Directional wilds also appear in this slot, and they can further boost your chances of landing wins in the slot.

In order to trigger Big Vegas’s solo special feature, you will need to land 3 of the Free Games Lounge scatter icons on the second, third, and fourth reels of the game. You’ll also pocket a 3x total stake multiplier for doing just that.

In the bonus game, players will only pick up 5 free spins. On the plus side, though, they can also collect an extra wild symbol. It is coloured purple (as opposed to the default blue one), and when they appear, they will act as sticky wilds, remaining in place for the duration of the free spins bonus. Players will pocket even larger wins when purple wilds are used alongside directional wilds.

Big Vegas is an excellent slot to play if you love your wild symbols. However, as we have noted before, there is a distinct high variance to this slot, and that is going to put a lot of the low-rolling players off. Aside from that, this is a real quality online slot to play.