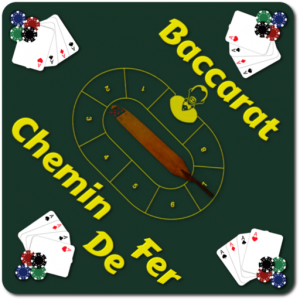 Chemin de Fer Baccarat is thought to be one of the oldest versions of baccarat – if not the original version.

It’s a card game that’s played with several players around a baccarat table. The role of “banker/dealer” goes around the table, and general rules are similar to blackjack.

Let’s check out the specifics of Chemin de Fer baccarat.

The main aim of this game is for players to get as close as possible to a total hand score of 9. To do this, players have the ability to hit or stand like in blackjack.

Players all play with one 2-card hand, and are basically a team playing against the dealer. When players are dealt their hand, they must announce any “natural hands” they have (8 or 9), as this constitutes an instant win.

The notable element of Chemin de Fer baccarat is that the role of banker goes around the table. That way each player has an opportunity to grab the overall pot, which is what the banker earns if he or she wins.

Games of Chemin de Fer baccarat go relatively fast. In the beginning, like most table games, players must buy-in with a nominal bet. Here, the dealer must also buy-in.

Players have multiple options regarding bets, as they’re playing as a team.

Once bets are placed, the banker deals himself a 2-card hand, and deals the players a single 2-card.

There’s nothing too complicated about Chemin de Fer payouts. It’s a bit of an either/or situation.

As you can see, playing as the banker will get you a higher payout figure, even though it’s still technically 1:1.